Portrait of a Town 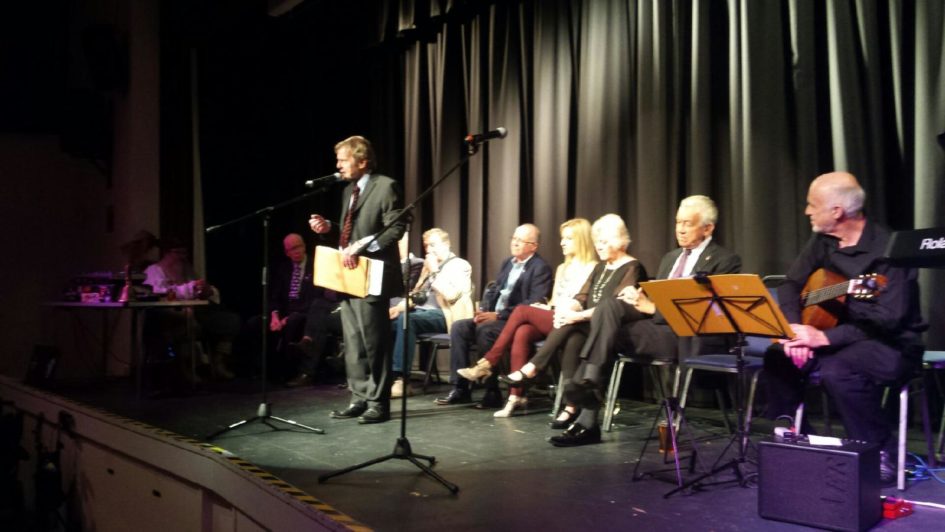 I was invited to the book launch of Alan R Bennett’s latest book ‘Wimborne Minster Portrait of  Town’ on Wednesday this week.  The Allendale Centre’s Minster Hall was set for an audience to hear how the book was put together and from some of the people that have been included in the book (including me)!

Alan wrote a similar book 25 years ago and wanted to update it with how the town is today.  It includes everything from the Council, developments, local charities, shops, organisations and people of interest.  The book is a large hard back on sale for £20 with some of the proceeds going to Wimborne Dementia Friendly Society and Friends of Victoria Hospital. Queuing for a book

I was on stage with Alan and other people involved in the book.  There were also some musicians and Chris Brown putting some music together .

People got themselves a drink and made themselves comfortable whilst Alan introduced various people to talk about their involvement e.g. photographs taken or interviews they’d given.  He interviewed me about how I came to love Wimborne many years ago when I first came here to work in Abbey (now Santander) and had a window over looking the High Street.  That was it, I fell in love and moved to Wimborne!

He had a great deal of support on the night which was really nice for him.  People were able to buy their copy and get it signed by Alan (which of course I did). We also had a photo taken with 6 previous Mayors and myself with Alan – can’t be very often you get that many Mayors in one place!

I also had the fortune to meet Margaret and Robert Cave who are the oldest couple ever to marry in this country at 91 and 92.  What a lovely couple and of course, they’re in the book!