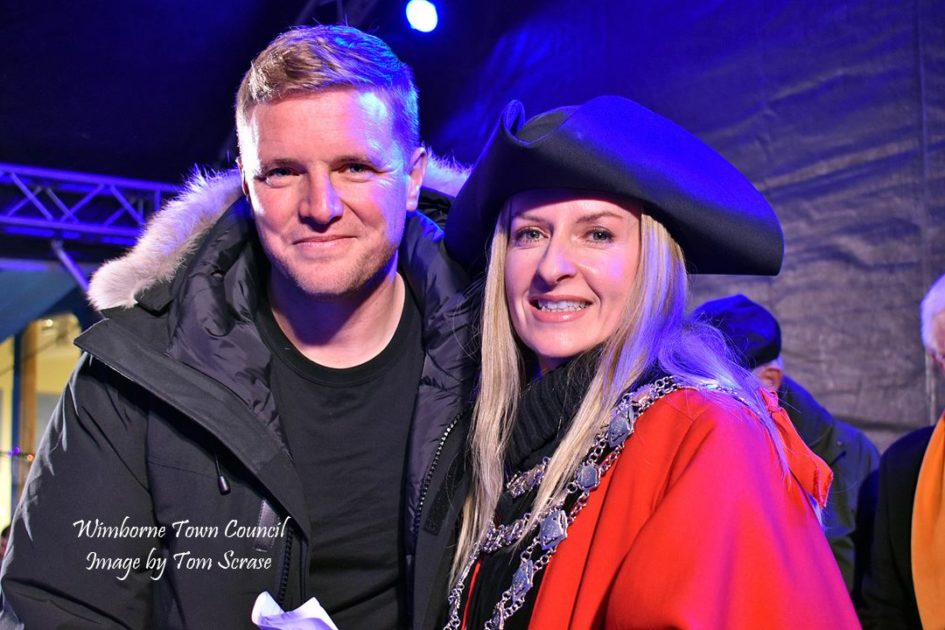 The Christmas Light Switch On day in Wimborne Minster is a bit of a ‘thing’!  And it’s getting to be a bigger and better ‘thing’ year on year.  Once we realised that the community so wanted to be involved and a part of such a great day, the Town Council and Wimborne BID decided to give them a stage (literally).

So for a few years now, the Square has been cleared and a stage set for a full day’s programme of entertainment.  I had an early start – getting down to the Square at 6:30am to meet the crew that were managing the delivery and set up of the stage and sound system.  Freeman of the town, Anthony Oliver MBE, came along too and we gave the crew directions to make sure the stage was going to be best placed for allowing the businesses on the Square to continue to operate and for the crowds to get a good look at what was going on.

I came back down later on – about 10:30am to hear the Town Crier opening the proceedings.  We started off with a Jukulele band and went on to various choirs and the QE School Jazz band.  There was also an appearance from a couple of ugly sisters from the Tivoli pantomime.  Although it was a drizzly day, all performers had a good audience (well what are friends and family for)!  And we had quite a few collectors from the Council and my charities, holding collecting tins throughout the day.  We raised £283 which was up a little on last year.  I’d been dancing around in my robes rattling my tin for probably about half the day before someone (much more experienced collector from Julia’s House, told me that it was ‘bad form’ to rattle) – that told me.  However – please note – my tin had the greatest collected at the end of the day! I had to dash off just before 1pm to welcome Santa no less, to the Coach and Horses up the road.  And what a lovely fella he was!  He assured me that the problem with lack of snow in Lapland was now gone and there was plenty of the ‘white stuff’ to go around!  I cut the red ribbon to the grotto – behind red curtains in a huge inglenook fireplace in front of the bar.  There were loads of kids who had pre booked their session with Santa, so lots of happy faces around! Back to the Square just after 2pm and the crowds have got a little bigger!  The Jazz band is playing and they always draw a good crowd – well they are rather good!

The Chairman of East Dorset District Council Cllr Mrs Toni Coombs came along and at about 3:30pm we popped along to the Square Chinese where we had arranged for a VIP Champagne reception for a few of the Cllrs that had helped to collect on the day and some friends and family.  They were all eager to meet the big star of day!

I could see the crowds were huge, so when I got a call to say Eddie Howe AFC Bournemouth football manager, was nearly in town, I made a quick call to get the Militia ready to greet him.  They gave him a guard of honour to the Chinese to make sure he got there safely.  We had a glass of Champagne and some complimentary nibbles courtesy of the lovely people in the restaurant. Then at 4:15hrs we headed for the stage. The crowd gave Eddie a great welcome!  There were AFC Bournemouth scarfs and hats everywhere – I knew they hadn’t come for me that’s for sure!  After introducing Eddie, he gave a few words to the crowd and even did an impromptu interview with Chris Brown the Town Crier and Jimmy Glass who works with him at the club.

We had a few laughs as you can see from the photos but I can’t necessarily tell you what we were laughing at – we just had a great time!  After a countdown to the switch on from 10, Eddie pressed the switch and the town lit up!  We headed back to the restaurant – but on the way Eddie was happy to have his photo taken and signed lots of autographs. Safely inside the Chinese, Eddie gave an exclusive interview to Radio Wimborne which was just brilliant of him and was happy to take photos with everyone who wanted one with him.  He also signed a couple of footballs for me as I had planned to auction them off at my Christmas party the following week. He eventually got away after more photos and signing outside the restaurant – it didn’t take the crowd long to work out where he had gone!

What a super day, lots of great feedback about Eddie’s appearance (shame they lost against Arsenal the following day)!