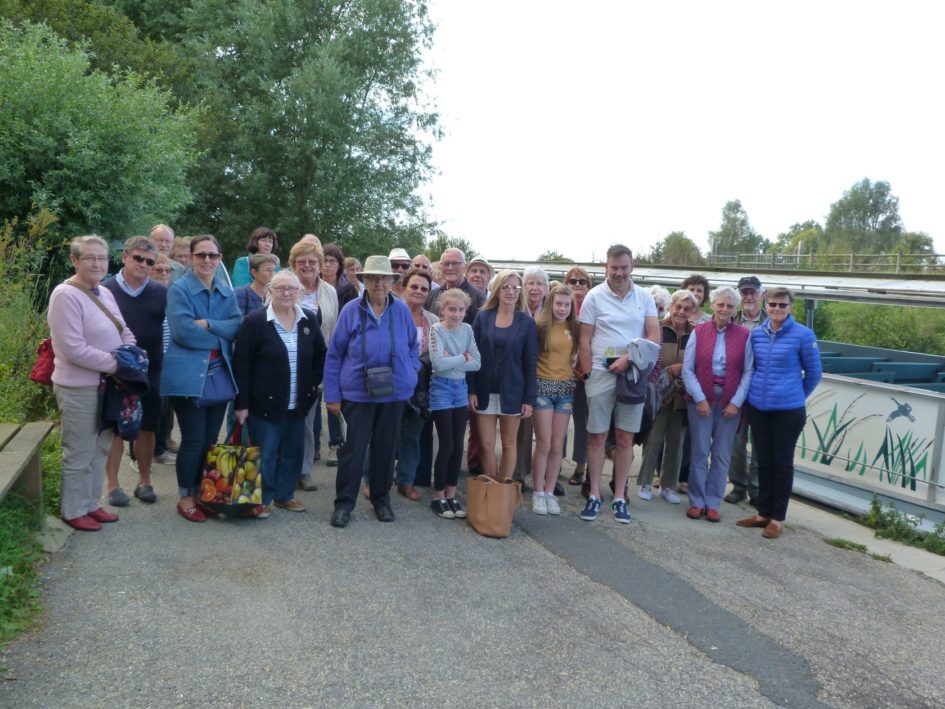 Half the group after the boat trip With the Mayor of Valognes, Jacques Coquelin

Another new experience for me!  Last Friday the family packed bags and headed for Cherboug via Poole for a weekend with the Twinning Associations of Wimborne Minster and Valognes.

All visitors are assigned ‘hosts’ who are happy to open up their homes to accommodate their ‘twinning’ friends and then take care of them during the stay.  Our hosts were Mesdame et Messieur Brotin who were absolutely wonderful!

It was my first time in the area so everything was interesting and new.  On Friday we were invited to formally open a newly planted ‘Jardin de Wimorne‘ in the centre of Valognes.  A plaque marked the day –  I was quite surprised and delighted to see my name on there along with the Mayor of Valognes. Outside the Town Hall

After that we headed to the Town Tall where I knew I was going to do a little speech (which I’d thought I’d have at go at doing in French – much google translation and practice took place in the days leading up)!  But I was quite surprised at such a large turn out and the beautiful large room that we gathered in certainly brought a nervous lump to my throat!  It all went pretty okay – at least people were very kind afterwards after my brave attempt…

After speeches and gifts were exchanged, we were treated to a fabulous buffet which included a wonderful vegetarian filled and carved set of melons.  You can see the words carved into the melons were to celebrate the 50th anniversary of the twinning of the two towns.

Speaking in the Town Hall On Friday evening our hosts treated us to an amazing home cooked meal and some fabulous wine – of all the colours and types you can imagine!  Their house was an historic property that had been totally wiped out in the war and rebuilt by the Americans afterwards.  There’s quite a history to it and they kindly showed us some old war time photos – the ‘before’ and ‘after’ of their house.

On the Saturday the group from England split into two groups to enjoy the itinerary over the two days.  After lunch (another great meal courtesy of the Brotins in their beautiful typical French dining room), we  went on a river boat trip in what they call ‘Les marais blancs’ or ‘Les Marais verts’, depending on the weather (when flooded the fields reflect the sky so appears all ‘white’ and in the summer you can see the ‘green’ of the fields).  We enjoyed lots of wildlife including seeing Kingfishers and herons. Half the group after the boat trip

Later that evening we headed to the coast to a very scenic area with deep sandy beaches and ate together (we took over the whole restaurant as there were over 80 of us there), at the seaside .  It was another fabulous spread.  We had great fun, there was even an artist on site doing some fun caricatures  – no I’m not showing them – they’re not supposed to be flattering are they?! Sunday morning Messrs Brotin took the four of us out in his car for a tour of the area particularly where there are war time monuments and information.  We first went to Sainte Mere Eglise a key town that was first to be liberated by the Americans.  If you haven’t been there, it’s definitely worth a visit and incredibly moving. There are a number of points of interest which the Mayor of the town pointed out to us (very kindly arranged by Messrs Brotin especially).  But this church as you can see in this picture, was amazing.  You can see if you look closely that there is a model of a parachutist and his parachute hanging from the spire.  This event took place during the war and the town remembers how the man suffered (although did survive after being shot in the foot whilst up there).  He was deafened by the bells from the tower as he was up there for quite some time!  We were then taken to Utah beach which also has many different monuments to the liberation.

The ‘Landing boat’ and soldiers

A memorial to ‘Andrew Higgins’ was at the beach, telling the story of his design and how successful the boats were.  This boat was just off the beach with a number of sculptures of soldiers exiting.

Tanks are also along the beach with information relating to how they were used.

We went to the D-Day Experience museum where they have a flight simulator which is not the ‘disney’ type I can tell you!  It’s quite an emotional journey to experience this ‘flight’ and understand a bit about what these men went through all those years ago. In the afternoon we went to a farewell lunch in the equivalent of their Allendale Centre.  All the hosts brought along cutlery and crockery for their guests (what a great idea), and a BBQ was served. Mme Brotin made sure there was something I could eat (gluten free for me), at all times, very considerate.  The Town Mayor was again present and event gave us a little sing song at the end of the meal.

I can honestly say I had the best time!  The people were so lovely and welcoming (Brexit – what Brexit)!  I would certainly encourage people to join up – we need to keep the positive relationships going for years to come!