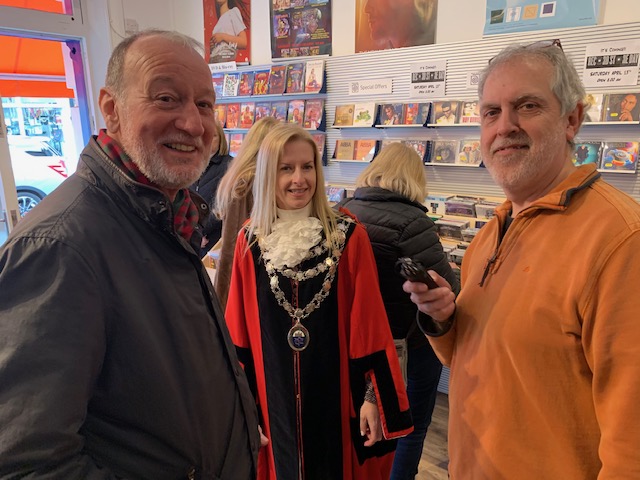 Saturday 13th April is Independent Record Store day and since we have one of the very few in the country – and a very popular one at that – it was a busy day in town!

Not only was there a special charity event on the Minster Green in aid of the Wimborne Food Bank (put on by No9 Bakery), but there was also the Buskers Bash event which has become a bit of a tradition in town.  The Town Crier was out over seeing proceedings and Radio Wimborne’s mobile studio was outside the Minster compering the charity event too. There was such a lovely atmosphere with loads of people in town.

The queue for the record store started on Thursday night and wound around the High Street corner into East Street.  Special releases are put out to the independent stores in advance of the day, so very keen enthusiasts who are happy to camp outside shops, will make it their business to be in the right place at the right time to get a rare and sought after special edition. In the record store

Square Records has been in Wimborne Minster for many years and has a serious following, last year it was at risk of closure – and even got a mention on Radio 4!  Luckily the owners of Gullivers Bookshop came along and took over the business and moved it just along the road to a new shop with a new image and the success continues!