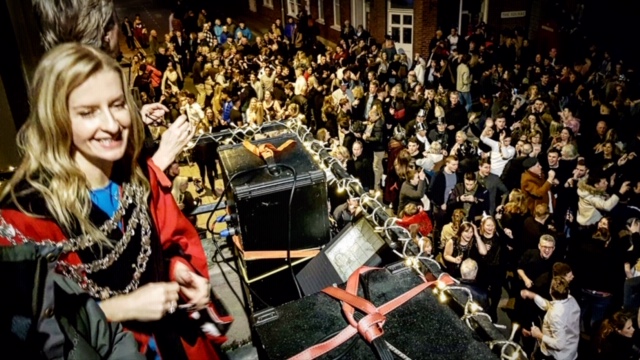 Well I’ve been told that NYE in town is great and that the Square fills up close to midnight but I haven’t yet seen it for myself until now!  And wow!  What a super night it was!

I ate in town with family and then at 22:30hrs we headed down to the Kings Head where they’d kindly set aside the upstairs room for me and my guests to use up until Midnight.

David Hartwell has for many years arranged and organised music to play from the Kings Head balcony, out into the Square.  The speakers were set up earlier in the day and much testing took place – can’t have any nasty surprises like switches tripping at the wrong moment!

So at 23:30hrs the room was buzzing, Chris Brown the Town Crier was of course present as he was the master of ceremonies for the evening and the Militia were also ready to do their bit come midnight.

Some fellow town Councillors came along with friends and family and again Cllr Gorringe from EDDC paid us a visit – we know how to show people from outside town, how we can put on a show!

Chris spoke to a gathering crowd leading up to midnight.  The Piper was guided through the Square to meet me at the door of the Kings Head and came up to stand on the balcony to play a little more.  Chris invited me to say Happy New Year to the crowd (nothing prepared), but I just gave them my best wishes and said what a great crowd they were.  I could NOT believe the size of the gathering.  people in every direction from the Kings Head to the back of the Square – over towards Mill Lane and left up West Borough (the road was close for an hour to allow this to happen).  Much dancing in the street, climbing of the tree in the Square and flower tubs!  But no trouble, just a great atmosphere. On the balcony – the dancing created ‘chain slippage’!

Quite a number of people ventured out onto the balcony to dance along with the crowd.  A few people that venture down every NYE said they’d never seen such a big crowd – again, a clear dry night always helps with getting people to join in!

Chris gave the all important count down to midnight – to which the crowd joined in and then on the hour, the Militia based at the door down on the street, fired their muskets – much to the crowd’s delight – who needs fireworks when you have your very own Militia!

I had a fantastic time – another one of those ‘I never thought I’d ever do that’ moments – added to the many I’m collecting in this wonderful year of being Town Mayor – wow – what a fantastic end to a spectacular year!

This footage was kindly taken by Cllr Bill Richmond.