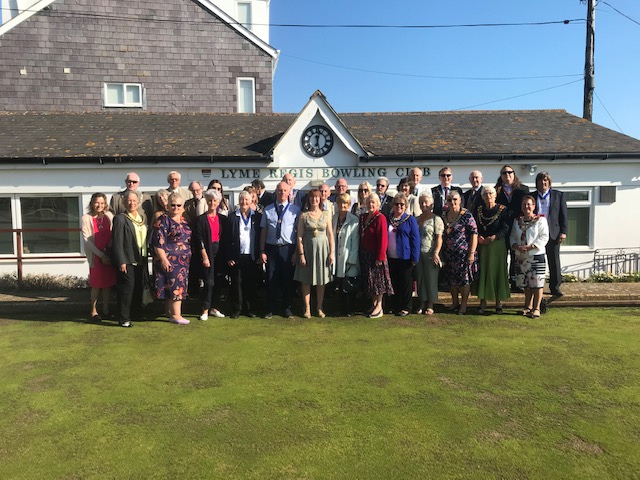 I’ve only been to Lyme Regis once before and that was ages ago so I couldn’t remember much about it apart from sea and hills.  It’s quite a distance from Wimborne Minster so I wasn’t really looking forward to the journey but actually once through the fog at Dorchester, it was a lovely ride through the countryside to get there.  Dropping down into Lyme Regis is an stunning view (a bit like going to Weymouth on the old road).

After meeting at the Bowling Club – right on the harbour – (nice view for a game!),  we went on to visit the small Aquarium on The Cobb – a small ‘spit’ of land that forms the harbour wall.  The building on the end of it used to be a quarantine area for people arriving, The Cobb wasn’t actually connected to the mainland at that point!  In the Aquarium, we were able to feed the fish and I even held a live starfish – normally I only get that close to dried ones!

A price board in ‘old money’ is still on the side of the building – what a great keepsake! Grannies Teeth steps on The Cobb

We then went on to visit the town’s boat building academy – who knew there was such a thing!  We had a talk on what they do there and it was fascinating.  Students get a nationally recognised qualification in just 9 months – compared to a similar level qualification in about 2 years at college!  This is because you attend full time rather than one day a week.  Because they structure their course differently though, it means they can’t attract any government funding to help less well off students.  Which is such a shame because there were some case studies quoted where people have learnt a proper trade, after actually building their own boat and taking it home with them!  Great ethos! With a boat being built

After a super fish and chip lunch (where they made me Gluten free batter – what a treat), we were taken around the Lifeboat station.  We had a talk about how they get their ‘shouts’, all about the volunteers and fundraising and coordination between them and other stations – including Poole head office.

We didn’t get to go on a boat but they brought one out for us to take a look at and a few of the crewmen put on their full rescue gear to explain how it all worked.  Which was great for us but it was a very warm sunny day, I think they were suffering a little!

After a very enjoyable day, we headed back to the Bowling Club for tea and biscuits whilst being entertained by a local group that brings music to children to bring talent along and builds confidence. To find out more about them see their website at – B sharp.

Another enlightening set of talks about one of our great Dorset towns.  I particularly liked the view of the Gold Cap – I’m told the highest point along the Jurassic coast! Talk on the boat