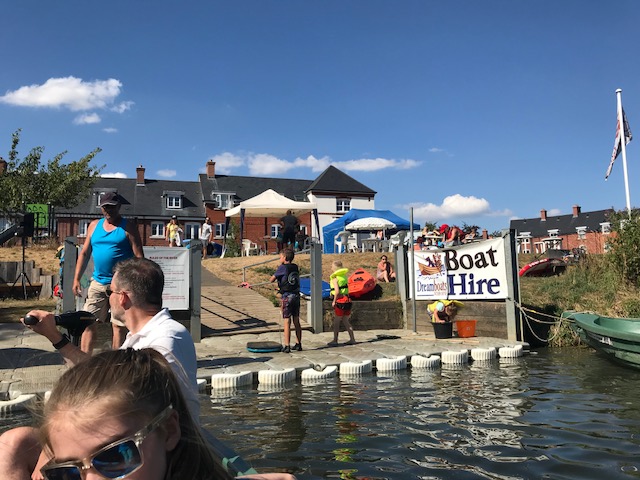 Dreamboats from the river Dreamboats from the river

I was invited to Dreamboats, Wimborne’s very own pleasure boat attraction at Riverside (just near Wimborne market – turn right as you turn into the industrial estate).  Dreamboats is a charity – part of Vision Wimborne.  This means it is run by volunteers – and so many of them too!  It’s wonderful that so many people in our local community give up a great deal of their spare time to provide facilities and enjoyment to local people – and any visitors to the town of course!

The Dreamboats Regatta is an annual event that allows boats to be taken out to go head to head in a race up and down the river!  Two boats race at a time so the very important job of keeping a table of competitors and winners, takes place in the judging gazebo throughout the afternoon.

It was another beautiful sunny Sunday afternoon yesterday and the river bank was well attended.  Those that didn’t want to race were able to buy a drink at the ‘bar gazebo’, win a prize in the ‘tombola gazebo’ or have a cream tea in the ‘cake gazebo’.

I brought along my robes for the important parts of the day e.g. prize giving and photographs but it was too hot to keep them on the whole time – I’ve already had a touch of heat exhaustion this summer!

I was given a tour of the facilities at the Riverside by head boatsman Joe and Chairman of Dreamboats Pat Hymers and they shared their dreams of how the facility could be improved over the coming years, so exciting. Then I was given the honour of presenting the very special silver Cup to the winning team ‘Superman’!  There were some accusations of cheating against competitors but if there was a rule book it didn’t state that flippers couldn’t be used – so no cheating confirmed! Kids were jumping in the water with their life jackets on which looked like great fun.  There’s even one of the older ones that regularly snorkels and pulls out rubbish from the river – normal stuff like bikes and mopeds (hhhmn, not good)…

I enjoyed a nice glass of rose wine and when the required photo shot was over, my family hired a boat and we went up and down the river ourselves for a short ride (we chose a boat with a small motor – cheating I know).  But if you don’t think you’ve got the ooomph required, it’s ideal – and you can’t hear the motor, so it’s very peaceful out there. Thank you to everyone at Dreamboats for inviting me and looking after me so well.