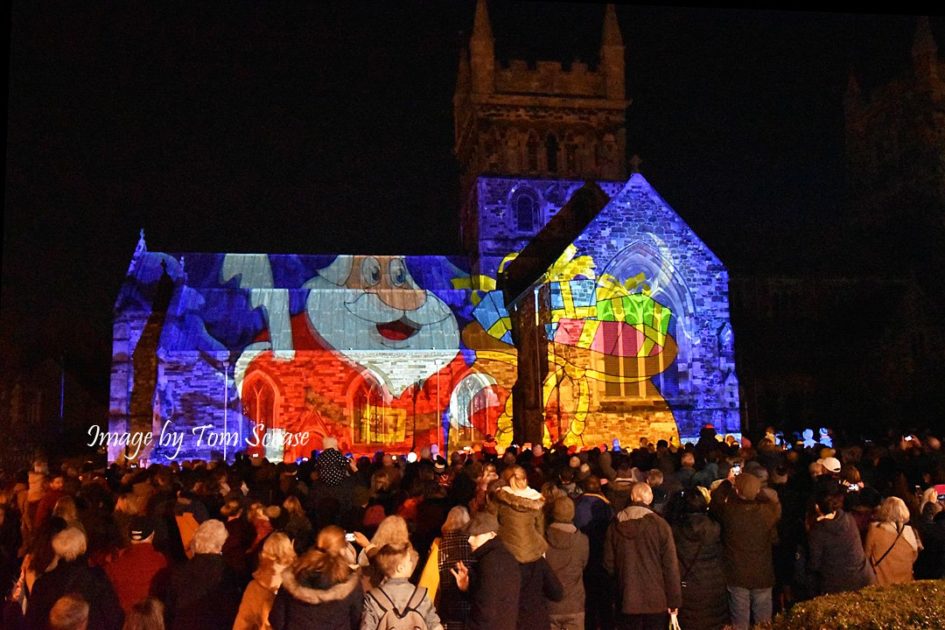 Well it’s the 4th year of this relatively new Wimborne Minster tradition and what a great tradition it is too – especially since it’s free to all in the community!  I helped set up Radio Wimborne back in 2013 when the plan was formulated to create a radio station and then was there for the very first ‘launch’ show in the January of 2014.  I’ve done a weekly or twice weekly show ever since and love it! Radio Wimborne’s volunteer team have brought a number of events and supported other’s events throughout the last 5 years.  There have been many ‘outside broadcasts’ and covering of special town events, from midnight mass to the pancake race.

Back in 2015 Malcolm Angel had the idea of using a powerful projector to project images against the facade of the Minster itself and we toyed with Christmas images and music and hoped people might tip up and see what we had to offer.  Well!  There was one huge crowd!  And each year it has got bigger and better (hhmm think we may need to close the road next year – the crowd over spilled into the High Street – yikes). This year was particularly special as we added to the offering by inviting the Gugge 2000 to come along and play for the crowds as we waited for darkness to fall and the light show to begin. One of the images

The band played for about half an hour and ATW (one of Radio Wimborne presenters), talked the crowd to entertain them up to the start of the show.  He brought me to the mic at one point to say hello to the crowd – quite scary as the crowd was actually quite large and above me on the Minster Green!

As the show got started, I decamped to No9 on the Green who once again allowed us to use their top room as our ‘VIP’ lounge for the show.  The Deputy Chairman of EDDC Cllr Barry Gorringe and his wife Margaret came for the show along with some other invited guests.  All were extremely impressed!

We have had so many positive comments from the people that came to watch – social media was full of comments, plus emails and word of mouth.  We want to thank our sponsors, including Wimborne BID and the Town Council – and a special anonymous donor that helps us out each year – all for the good of the town!

Of course Radio Wimborne couldn’t pull this off at all without the continued support from our sponsors during the year, this year we are grateful to be sponsored by Lester Brunt on West Borough. Unfortunately without our wonderful Community Magazine (sadly ceased print at the end of December), you won’t see these pictures in the local paper!!  Well done to the wonderful Radio Wimborne volunteers who work so hard all year to research and compile the pictures and sound for the 1.5hrs on one cold day in December!